Atlas of Human Anatomy and Surgery 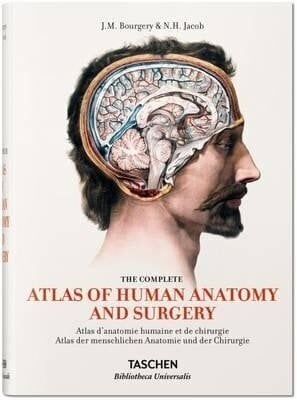 Anatomically correct: An unsurpassed treatise of the human body
We owe a great debt to Jean Baptiste Marc Bourgery (1797–1849) for his Atlas of Anatomy, which was not only a massive event in medical history, but also remains one of the mostcomprehensive and beautifully illustrated anatomical treatises ever published.

Bourgery began work on his magnificent atlas in 1830 in cooperation with illustrator Nicolas Henri Jacob (1782–1871), a student of the French painter Jacques Louis David. The first volumes were published the following year, but completion of the treatise required nearly two decades of dedication; Bourgery lived just long enough to finish his labor of love, but the last of the treatise’s eight volumes was not published in its entirety until five years after his death.

The eight volumes of Bourgery’s treatise cover descriptive anatomy, surgical anatomy and techniques (exploring in detail nearly all the major operations that were performed during the first half of the 19th century), general anatomy and embryology, and microscopic anatomy. Jacob’s spectacular hand-colored lithographs are remarkable for their clarity, color, and aesthetic appeal, reflecting a combination of direct laboratory observation and illustrative research. Unsurpassed to this day, the images offer exceptional anatomical insight, not only for those in the medical field but also for artists, students, and anyone interested in the workings and wonder of the human body. 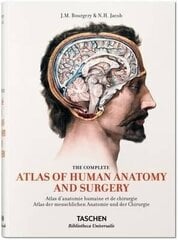 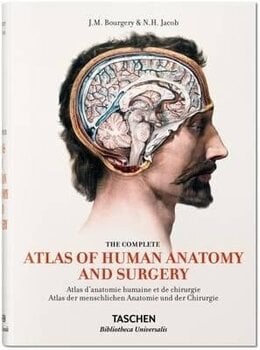 Par šo preci vēl nav uzdots neviens jautājums. Uzdodiet savu jautājumu.
Lord of the Flies, Ten Times Happier : How to Let Go of What's Holding You Back, The Woman in the Window, Rage of Dragons, The, Becoming, Tintin in the Land of the Soviets, Whale Done!: The Power of Positive Relationships, The Future Is Faster Than You Think: How Converging Technologies Are Transforming Business, You Are a Badass at Making Money : Master the Mindset of Wealth: Learn how to save your money, Bezos Letters : 14 Principles to Grow Your Business Like Amazon, The, WAR DOCTOR, DNA Book : Discover what makes you you, Visual Protest: The Art of Banksy, Selfish Gene : 40th Anniversary edition, Rules of Civility
The Tattooist of Auschwitz: the heart-breaking and unforgettable Sunday Times bestseller, Clap When You Land, Bezonomics: How Amazon Is Changing Our Lives, and What the World's Best Companies Are Learning from It, Rules of Civility, Becoming, Love Simon, Ballad of Songbirds and Snakes (A Hunger Games Novel), Mr Salary: Faber Stories, The World's Worst Parents, Slime, The Future Is Faster Than You Think: How Converging Technologies Are Transforming Business, A Man and His Watch, Nothing Ventured, Why I'm No Longer Talking to White People About Race: The Sunday Times Bestseller, A Good Girl's Guide to Murder